HDMI connectors and extenders help you join two normal male-to-male HDMI cables, creating a single longer HDMI cable. HDMI extenders can be quite useful when you have two HDMI cables that together are the correct length for your intended use but neither one is long enough on their own.

There are two types of HDMI extenders: HDMI coupler extenders and HDMI over Ethernet extenders. 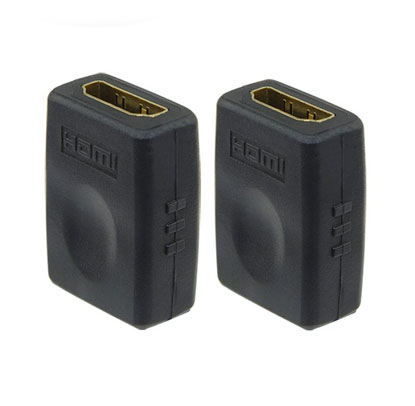 When all you need is to join two normal length HDMI cables (50 feet or shorter), HDMI couplers can work well to suit your needs. They’re easy to figure out too: HDMI coupler extenders work by providing a female-to-female HDMI connection that your normal HDMI male-to-male cables can plug into.

The Best HDMI over Ethernet Extender

When you need to send an HDMI signal over a distance of longer than 50 feet (the limit at which HDMI cables begin to become unreliable), an HDMI over Ethernet solution is more practical and less error prone. HDMI over Ethernet converters are made up of two separate devices, usually two separate boxes. One box, the transmitter, takes your incoming HDMI signal (say from a computer for instance), and outputs it over an ethernet cable, which then connects to the second box. The second box, the receiver, accepts the HDMI signal sent over your very long ethernet cable (perhaps even hundreds of feet long) and then converts it back to a normal HDMI outlet.

To set up an HDMI to ethernet extender, you’ll need the extender itself (which is two boxes; a transmitter and a receiver), two HDMI cables, and an ethernet cable.

There are similar devices to convert HDMI to coaxial cable as well.